Home Ministry & Discipleship It Is Never Too Late 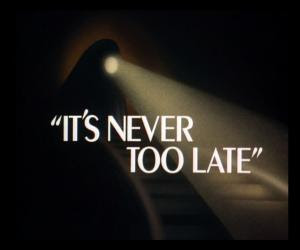 It Is Never Too Late

…this is a continuation from last week article titled ‘It is not in vain.’

At some point in time, one or more people must have prayed, pursued and persuaded men to forsake their evil ways and turn to righteous living. Some might have died without seeing them repent. Some might have given up, discouraged as they saw these men go deeper in their sinful acts and wickedness. But in their dying hours, the two men remembered that Jesus is the way to eternal life and they made it right with God by putting their trust in Jesus. The dying sorcerer remembered there was life after death. He remembered that pastors show people the way to heaven.  The criminal couldn’t have learnt those words of faith on the cross; but possibly from his parents, a rabbi as a growing Jewish boy or from the synagogue and the temple as an adult; until he derailed somewhere into criminality. But in the face of death, he remembered something like:

He remembered all this because he must have at one time or the other heard them preached or taught. Though his life contrasted what he knew about the kingdom, he remembered and appropriated them when the time came. Jesus accepted him instantly without giving a thought to his sinful wasted past.  So also did He accept the sorcerer who once publicly despised God’s supremacy.

It is Never in Vain

Parents, teachers and ministers of the word labour to bring children and adults to Christ. Sometime they meet with frustrations and disappointments.  Some preachers write off some sinners as impossible candidates of the kingdom.  Such should be encouraged that their labours are never in vain even if results are not seen immediately. Keep at it. Proclaim it anyhow and demonstrate it by all means. You never know when the seed you plant will germinate and yield results. There will be surprises in heaven.

It is never too late

“Beware, brethren, lest there be in any of you an evil heart of unbelief in departing from the living God; but exhort one another daily, while it is called “Today,” lest any of you be hardened through the deceitfulness of sin. For we have become partakers of Christ if we hold the beginning of our confidence steadfast to the end…”

It goes on to exhort “Today, if you will hear His voice, do not harden your hearts as in the rebellion.”

So no one should be encouraged to postpone putting his faith in Christ till dying moments. Many may not have the opportunity to call on Jesus before death as the sorcerer and the thief had. Nevertheless, Jesus accepts anyone that comes to him at any point in time and the way they are. Let no one hinder or discourage a willing soul from making amends in their last days.

As proclaimers of the gospel, we only open the door to heaven with the key (gospel) that is given but we are not the gate keepers deciding which specific individuals enter. We don’t decide when, how and where the seed we scatter will germinate.

At the blast of the trumpet, many Christians will rise from non-Christian graves. Let us be encouraged by Paul’s admonition,

“Therefore, my beloved brethren, be steadfast, immovable, always abounding in the work of the Lord, knowing that your labour is not in vain in the Lord. (1 Corinthians 15:58)

Just ponder on this

We may be working in hard places or with difficult persons, never give up. Results will always come but may not be the way we expect. The criminal did not expect to be saved but suddenly remembered what someone sometime in the past said about the kingdom.  Now in case you want to give up on a person or a group of people just ask yourself, “What would have happened if Jesus had tried proving a point by coming down from the cross as the mocking party wanted him to?”

The destiny of many people hang on our being on that cross we carry. When God wants to work in the lives of the people you’ve laboured on, it will never be too late.